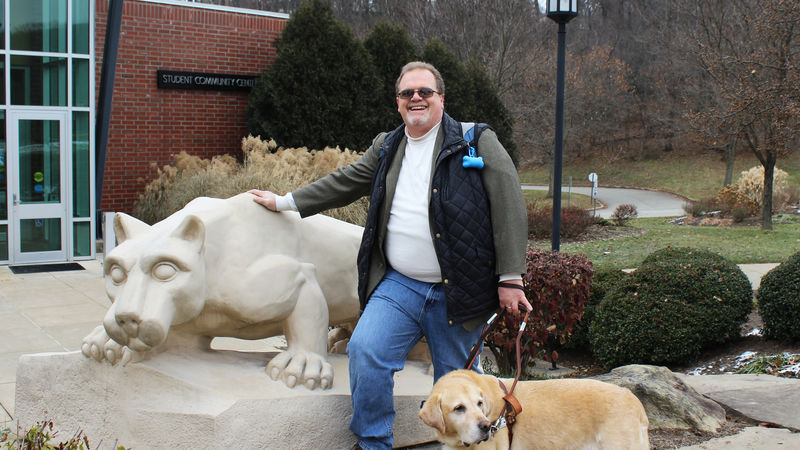 Disabled veteran will graduate this semester next to service dog

MCKEESPORT, Pa. – Jerry Pastories’ life nearly ended before it got started. Shortly after enlisting in the Army, doctors discovered a brain tumor. Complications from the procedure left Pastories partially paralyzed and blind.

“I looked over at the technician who was giving me this information, and he was in tears. I said, ‘Let’s do this thing because if all I have is six months, I don’t want to spend a minute of it sitting around here crying about it with you.’”

But the McKeesport native battled back from the brink, and will cap his comeback by receiving his bachelor’s degree at Penn State Greater Allegheny on Dec. 14.

At 18, Pastories joined the Army as a private first class cannon crew member at Fort Knox, Kentucky. But less than a year into his enlistment, doctors discovered a brain tumor.

“Their first indication was that it was the size of a small orange and that if it were cancerous, I would only have six months to live,” said Pastories. “At that time, I had a child and one on the way.”

He continued, “I looked over at the technician who was giving me this information, and he was in tears. I said, ‘Let’s do this thing because if all I have is six months, I don’t want to spend a minute of it sitting around here crying about it with you.’”

Pastories underwent surgery to remove the tumor. When Pastories awoke, he was given both positive and cautionary news. The tumor was benign, but he experienced partial paralysis on the left side of his body.

After surgery, Pastories was relocated to the Walter Reed Army Medical Center in Washington, D.C., via medevac. In the medevac his brain began to swell.

“It [the swelling] cut off the oxygen and blood supply to my optic nerves,” said Pastories. “After the course of what I guess was several days, my optic nerves had died.”

His road to recovery was not a straight path, but one with some very low points. Pastories refers to this time as his ‘dark days of self-indulgence.’

“The pain I was experiencing was already on the inside of myself,” said Pastories quietly. “I was shutting out all the negative along with all the positives.”

Pastories underwent significant reflection of his character. “I was slowly, but most surely being re-established,” said Pastories. “The VA blind rehab centers had begun to help me see that I was not alone and that there were opportunities for me to exist in a meaningful and productive way.”

Pastories added, “It was after this that an opportunity was revealed to me about the possibility of attending college. At first, I was stunned and uncertain, but the option was a reality." 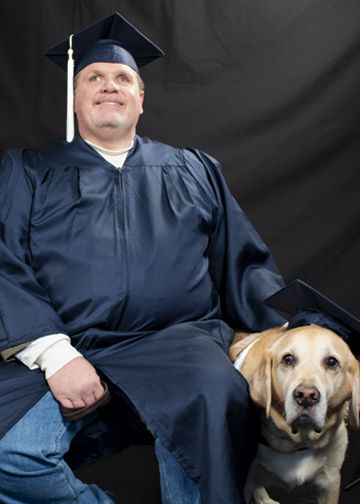 Pastories and Nittany [Service Dog] having their graduation photo taken.

In 2010, Pastories enrolled at Penn State Greater Allegheny. “The campus is right in my backyard,” said Pastories. “I was born and raised in McKeesport (Pennsylvania). This was my way of interacting with my community in a positive and meaningful way.”

"Jerry has been incredibly helpful as we think what it means to navigate not only our campus, but also what tools Penn State has to offer to assist our students. He offered suggestions so other students facing similar challenges can successfully navigate their education just as Jerry has.”

Pastories ambitions, when entering college, has always been focused on helping people. He wants to work with disabled veterans who want to earn a college degree or people who are struggling with addictions.

This December, Pastories will earn a bachelor’s degree in psychology, with the business option.

Pastories’ time on campus as not only an adult learner, but also a disabled veteran, was a challenge. He had to deal with different obstacles including accessibility, the campus’s terrain and his coursework.

“Along with explaining to the instructors what my needs were and discussing what would and wouldn’t work, being willing to experiment with various strategies, helped,” said Pastories.

Jacqueline Edmondson, Penn State Greater Allegheny chancellor and chief academic officer, said, “Jerry has been incredibly helpful as we think what it means to navigate not only our campus, but also what tools Penn State has to offer to assist our students. He offered suggestions so other students facing similar challenges can successfully navigate their education just as Jerry has.”

Throughout his academic career, his service dog Nittany has been invaluable in helping Pastories get around Greater Allegheny’s campus. Nittany, a 9-year-old yellow Labrador, has led Pastories to more than 40 of his classes and never left his side.

“The relationship [with Nittany] has been extremely helpful,” said Pastories. “Nittany has physically blocked me from falling down stairs. He has helped me engage with other students, because it’s easy to talk about a dog. It has enhanced my relationship with him. I take care of him and he takes care of me.” 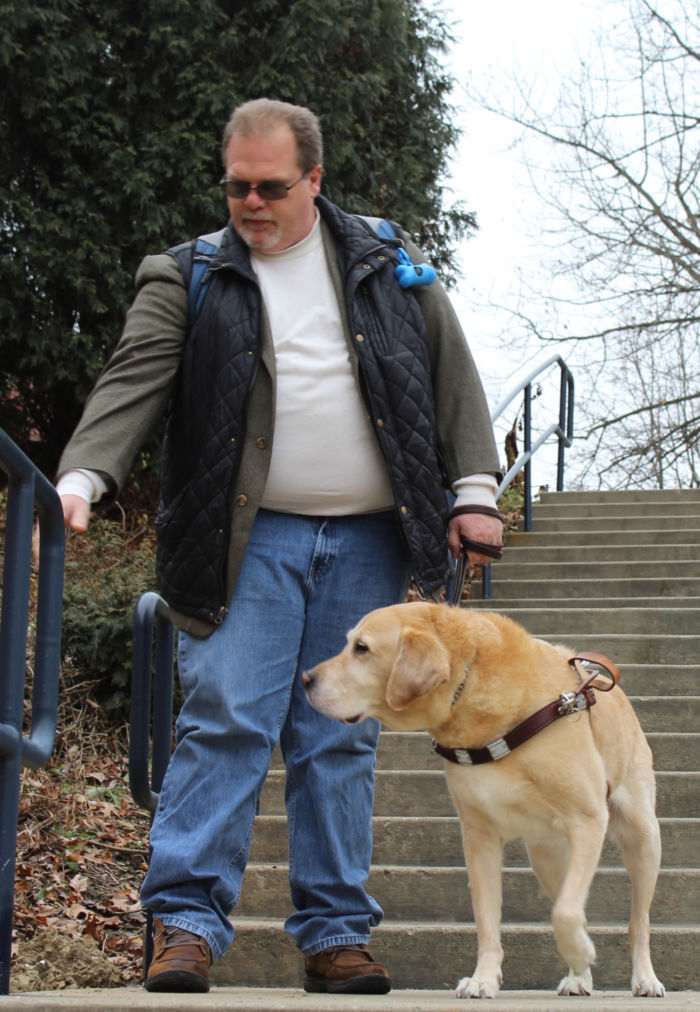 Service Dog Nittany making sure Jerry is safe before continuing down the steps on campus.

Although many departments at Greater Allegheny have supported Pastories, he gives the most praise to the Gruskin Learning Center’s efforts, directed by Siobhan Brooks, learning center and disability services coordinator.

“I think the learning center was an intricate part of my success because this was indeed a team effort,” said Pastories. “This was not something that I was able to do on my own. If I had to do this on my own, it would have never happened.”

Helen Alliston, a tutor in the learning center, worked with Pastories throughout his time at Greater Allegheny.

“I worked with Jerry his first five semesters and in math which covered Math 3 and Math 4, Ed Psych, and Visual Basic,” said Alliston. “We created programs specific to him so that he could keep track of his work.”

Going beyond the call of duty, Alliston and her family spent much of their free time helping Pastories.

Alliston’s husband, William, made an entire graphing board from wood, which allowed Pastories to plot out his math assignments using golf tees.

“When we started in algebra, they sent us software that we couldn’t quite master,” said Alliston. “One summer I typed up the class in a form. I made a two-column Microsoft Word table, so his screen reader could read it properly.”

“Ms. Helen was amazing in all that she provided,” said Pastories. “The help and support were remarkable. There’s no way I could have done any of this without her.”

Pastories hopes to continue his education by earning a master’s degree and is currently considering Duquesne University or the University of Pittsburgh. However, his dream is to work at Greater Allegheny’s campus alongside administration to help both blind students and disabled veterans earn a college degree.

“I believe that the opportunity to achieve this goal [graduation] has been a mutually enriching pursuit because of the teamwork that took place, between the faculty and staff,” said Pastories. “The thing I find the most empowering is that this is a building block – this was a team effort – it laid part of the foundation that will help my future and others in the future as well.”