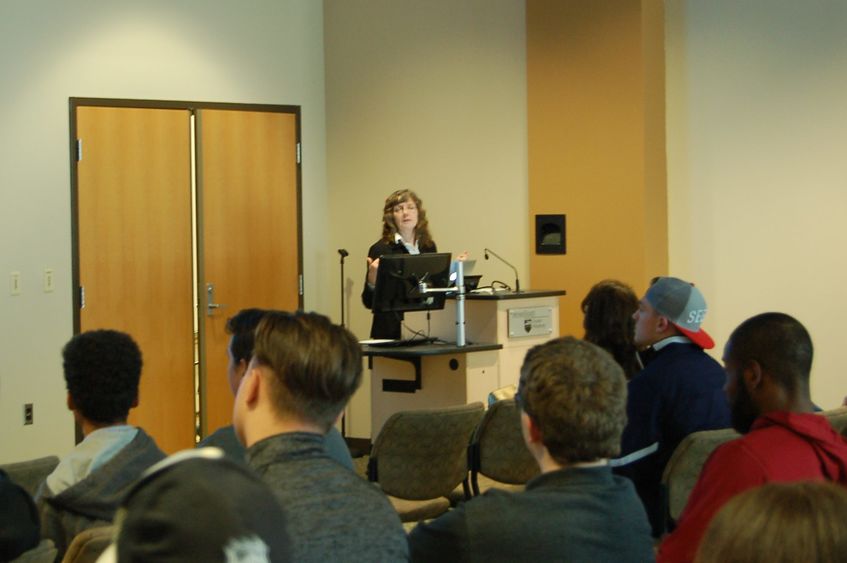 Margaret Power visited Penn State Greater Allegheny as part of the Teaching International Speaker Series to talk about “Eleanor Roosevelt and Human Rights: From Norvelt, PA to the United Nations.”

Eleanor Roosevelt asked this question in her daily newspaper column, "My Day," in 1938.  For many, her questions are still valid. The former first lady had a broad, inclusive, and for some, challenging definition of human rights and social justice, according to Margaret Power.

Power visited Penn State Greater Allegheny as part of the Teaching International Speaker Series. The title of her talk was “Eleanor Roosevelt and Human Rights: From Norvelt, PA to the United Nations.”

The study of human rights issues is at the core of Teaching International, a campus program that was initiated in 2004, and which used human rights as a specific theme in 2010-2011. In December 2010, students at Greater Allegheny marked Human Rights Day by participating in a letter writing campaign highlighting human rights crises. 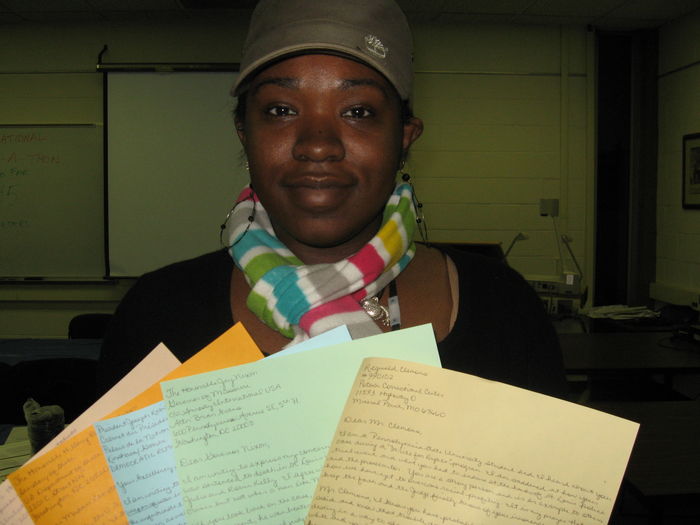 Penn State Greater Allegheny students have participated in Human Rights Day in various ways over the years. This photo shows a student who was part of the world's largest letter writing event to take action to assure that human rights are respected and protected around the world in 2010.

Power, who grew up in Greensburg, Pennsylvania, is a professor of history at the Illinois Institute of Technology.  She is the sole or joint author of three books that deal with the political Right, along with a number of articles.  Her current research focuses on Puerto Rico.

Power explained that while Roosevelt was a woman from the past, the issues she raised and fought for are very much concerns of the present. As first lady, Roosevelt had the opportunity to demonstrate her commitment to human rights and social justice.  Power said that according to Blanche Wiesen Cook, the preeminent biographer of Roosevelt, as chair of the UN Commission on Human Rights, Roosevelt “more than any other single person, is responsible for the Universal Declaration of Human Rights.”

Drafted by representatives with different legal and cultural backgrounds from all regions of the world, the Declaration was proclaimed as a common standard of achievements for all peoples and all nations.  The proclamation marked a milestone in the history of human rights. According to UN.org, for the first time, it laid out fundamental human rights for all, to be universally protected. Today, 68 years after its birth, the Declaration remains as relevant as ever.

Power spoke of Norvelt, a community that Roosevelt helped to develop in Westmoreland County, Pennsylvania. To help residents suffering from intense poverty, Norvelt provided the families the opportunity to have decent homes, a livable economy, and a dignified life.  More details about Norvelt can be found in the book Power coauthored, "Hope in Hard Times" (Kellly, Power, & Cary, 2016; http://www.psupress.org/books/titles/978-0-271-07466-5.html)

Associate Professor of Psychology Elizabeth Mazur, who attended the presentation with psychology of gender students, said, “We should have the same vision and passion as Eleanor Roosevelt did to become citizens of the world.  We should also follow her example of Norvelt with ‘bottom up’ governing - asking the community what they need - rather than officials acting from the ‘top down,’ telling the community what the administrators think is good for them.”

“Where, after all, do universal human rights begin? In small places, close to home -- so close and so small that they cannot be seen on any maps of the world... Unless these rights have meaning there, they have little meaning anywhere. Without concerted citizen action to uphold them close to home, we shall look in vain for progress in the larger world." -- Eleanor Roosevelt